❄⛄ An adorable reminder to KEEP WARM this cold, cold winter week! Special thanks to our viewers for sending us these awesome pictures!

Michael the Great  – a Chi-Wow-Wow!

Michael the Great is one of Nicole Bruder Gillis’ dogs. Michael was originally named ‘Mikey’, but soon after he became a part of the Lucy Goo family, we all could see his big personality break out, thus ‘Michael the Great’ was born. Michael decided he needed to conquer the world and started his own Twitter account!

You can follow him and be part of all of the adventures he gets into with his sister, Trinny the Wonder Dog! 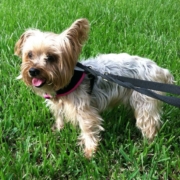 Check out our interview in Houston's PetTalk Magazine